10 nominated for Warriors Player of the Season Award

The Glasgow Warriors coaches have nominated 10 players for the McCrea Financial Services Player of the Season award. 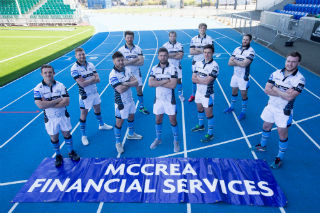 Supporters will be able to vote for their favourite player from the list below until 5pm today with the winner announced at the end of season Awards Dinner tomorrow night.

It has been a standout year for Fraser Brown, tearing it up in Europe with tries at home against Leicester Tigers and Racing 92 and firmly establishing himself in the Scotland team with a number of impressive performances for his country.

Once again Glasgow’s young captain has led by example all season making tackle after tackle and he scored a crucial try as the Warriors beat Leicester 43-0 at Welford Road to qualify for the Quarter-Finals of the European Rugby Champions Cup for the first time.

April’s Warrior of the month, Grigg has had a breakthrough season at Scotstoun. Winning Man of the Match twice, scoring four tries and in the top three in the PRO12 for defenders beaten, Grigg’s performances were rewarded with a new contract.

RBS 6 Nations player of the Championship for the second year in the row and a British and Irish Lion for the second time, Hoggy’s performances for the Warriors have mirrored those for his country. Having signed a new two-year contract earlier in the season he will join the centurion club against Edinburgh.

Another to sign a new deal at Scotstoun this season, Jones has been at the heart of everything Glasgow have done well. Playing in big European pool matches and scoring a try to get Glasgow back into the game at Allianz Park in the Champions Cup Quarter-Final.

McCrea Financial Services Warrior of the Month for December, Ali Price also has two Man of the Match medals to his name this campaign and made his Scotland debut against Georgia at Rugby Park.

Consecutive man of the match awards against Racing 92 and his opposite man Dan Carter got the rugby world talking about Finn Russell. Now firmly established as Scotland’s first choice fly-half.

Seymour started the season with a bang with six tries in the first two games of the season, including four against Leinster. Seymour was named in the British and Irish Lions squad for the first time ahead of the tour to New Zealand this summer.

Like Seymour, Swinson also scored in the first two games of the season. He went on to win consecutive Man of the Match awards against Munster and in Glasgow’s historic win at Welford Road. He was voted Warrior of the Month for January.

An ever present in the Warriors back-row, playing in all seven European matches this season and scoring against both Leicester and Saracens. Wilson’s versatility, leadership and work ethic earns him a place on the shortlist.

Supporters can vote HERE until 5pm on Tuesday 9 May.